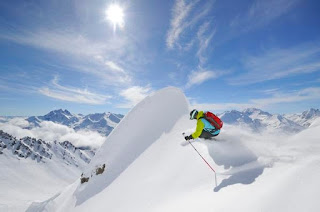 It is that time of the year again in St. Anton am Arlberg from 4th December: time to dust down those skis and boards and head for the hills! Even globe-trotting winter sports enthusiasts are inextricably drawn back to the glistening white slopes of this Tyrolean „global village” time and time again. The Valluga Peak at 2,811 metres above sea level is the highest point of the ski resort, where views extend to Switzerland and Italy on clear days. The “main arteries“ of Schindlerkar and Valfagehrjoch lie opposite to the Rendl Region, to the west of the Albonagrat Ridge. Arlberg is a veritable Eldorado for skiers with 350 kilometres of marked runs, 200 kilometres of backcountry terrain and 97 state of the art cable cars and lift systems. St. Anton’s season opening kicks off with Kim Wilde and Sportfreunden Stiller, followed by a winter full of exciting events. This includes, for example, the Women’s FIS Ski World Cup, the „Ski-Show“ and iconic race, „The White Thrill“. This Austrian holiday resort is also a member of „Best of the Alps“, a consortium of the twelve top ski resorts in the Alps. www.stantonamarlberg.com

„Stanton Ski Open” from 4th to 6th December
54, 74, 90, 2010 … ever since the Football World Cup, everyone will have heard of the Sportfreunde Stiller band. The three likeable indie rockers from the Munich suburbs have shared the stage with Udo Jürgens, played to capacity crowds at Munich Olympic Hall and performed undercover at diverse clubs. Nevertheless, Flo, Peter and Rüde will not be going incognito on 5th December in St. Anton: They will heat up the atmosphere with their fans in the concert grounds – together with special guest, Kim Wilde, who achieved international success in the 1980’s with a string of smash hits. The timeless melodies of this British pop singer, who once accompanied Michael Jackson and David Bowie on their European tours, will certainly get your feet tapping in St. Anton.
There will still be plenty of time left over for some fun on the slopes: visitors can try out the latest models from renowned manufacturers free of charge on a three-day ski test during the opening weekend.

Advent Magic in the Park and Christmas Market
True Christmas spirit is in the air on the four Sundays in Advent. Childhood memories will be reawakened at the Christmas market and Advent Magic surrounding St. Anton Museum. In addition to local crafts and tasty treats such as „Kiachla“ doughnuts, themed areas invite you to linger: visitors can create their own Christmas cards at the photo corner, children too can enjoy joining in the handicrafts sessions at the elves workshops or making cookies with the local baker. Visitors can also visit one of the log cabins, where Christmas stories are recited by people from St. Anton in local dialect. Dates: 29th November as well as the 6th, 12th, 13th and 20th December 2015.

TV recording of the RTL2 Après-Ski Hits on 4th and 5th December 2015
Iconic event for “Schlager” pop music fans. Winter sports fans will be the first to find out what will be playing in the ski huts this winter in St. Anton am Arlberg during recording of the RTL2 Après-Ski Hits 2016. If you like, you can be part of the action when international chart toppers present their latest hits at ARLBERG-well.com Congress and Wellness-Center on 4th December and at the MooserWirt the following day. Admission is free.

Festive end to the year: Concert by the Wiltener Boys Choir
A wonderful opportunity to contemplate on the past year’s events: the Wiltener Boys Choir will be performing a concert in the great Arlbergl Hall in St. Anton on 27th December (20 hrs). This 160 member choir is one of the oldest and most traditional boys’ choirs in the Alps. Their history dates back to the 13th Century and they share many historic links with their “colleagues” in the Vienna Boys Choir

Ski Show „Schneetreiben – Driving Snow“ – A journey through time with firework display
The slope in front of the Karl Schranz Finish Stadium in St. Anton am Arlberg is transformed into an über-dimensional screen every Wednesday evening. Giant images projected onto the slope with brilliant 3D effects and a firework display create an extraordinary stage for 150 actors to demonstrate the historical developments of skiing in an impressive time-lapse performance. The premiere takes place on 30th December, after which the 45 minute „Schneetreiben“ ski show will be performed every Wednesday at 21 hrs from 13th January onwards. The show is hosted by St. Anton am Arlberg Tourist Board, together with the Arlberger Bergbahnen Cable Car Co and Skischule Arlberg; admission is free.

Arlberg New Year’s Concert on 3rd January
St. Anton enjoys a classic start to the New Year with the traditional Arlberg New Year’s Concert on 3rd January at 17.30 hrs in the World Cup Hall at ARLBERG-well.com: Visitors are promised a wonderful performance by the Ambassade Vienna Orchestra, led by Prof. Dr. Rudolf Streicher, President of the Viennese Symphonic Orchestra and honorary citizen of St. Anton

Women’s FIS Ski World Cup: Arlberg Kandahar Race on 9th and 10th January
The women’s international ski elite will meet again in St. Anton am Arlberg to battle it out for important World Cup points in the Super-G and Downhill disciplines. The legendary race route down the „Karl Schranz“ Piste will take the athletes to their limits all over again. Both races end at the World Cup Stadium; where the World Cup Party will be taking place for all spectators. Visitors are advised to travel by rail.

New Orleans meets Snow from 8th to 10th April
The focus will be on soul. blues, funk and jazz in this Tyrolean holiday resort in April. With live concerts in the village streets and ski slopes of St. Anton, musicians and diverse bands will be adding a healthy dose of southern flair from 8th to 10th April. The „New Orleans meets Snow“ Festival has enticed the Austrian jazz elite to Arlberg for a third time now. A star guest from New Orleans will join the line up again this year.

„The White Thrill“ on 16th April has long enjoyed cult status
Race conditions have never been as tough as they were last winter – the bumpy Kandahar Slope and dense fog presented competitors with the ultimate challenge. Nevertheless, „The White Thrill“ attracts thousands of winter sports enthusiasts from all over the world every year to St. Anton am Arlberg. In principle, anyone can take part, although some know from experience that it is not suitable for absolutely everyone. The start alone with 555 participants is a challenge in itself and the nine kilometre downhill run with a gruelling 150 ascent somewhere in-between, takes even seasoned pros to their absolute limits.

Freeride Safety Training
Searching an avalanche area, using probes, digging... quick and efficient use of an avalanche receiver in the case of an emergency is absolutely imperative. In this respect, Arlberg cable cars have joined forces with Ortovox to set up a Freeride Safety training ground on the Rendl: five transceivers are buried in the training field close to the Salzböden area, which can be used by ski touring enthusiasts and freeriders free of charge. St. Anton holidaymakers can also find out about the current avalanche danger levels at three so-called Freeride Checkpoints at Galzig, Gampen and Rendl; equipped with detailed explanations, weather conditions, backcountry rules and additional information.


Horizontal and vertical sport: „arl.rock“ Sport and Climbing Centre
Tennis, volleyball, squash, bowling, climbing, bouldering: sports enthusiasts can also let off steam in winter at „arl.rock“ Sport and Climbing Centre in St. Anton am Arlberg. Highlights, in the truest sense of the word, include the many climbing possibilities: up to 30 diverse outdoor routes in varying levels of difficulty, 80 square metres of indoor bouldering facilities and 70 climbing routes in grades 3 to 9 are all waiting to be conquered. www.arlrock.at

Little snowmen having big fun – children can use the lifts for Euro 10 per season
Children born from 2008 only pay 10 Euros for the “Snowman Card” season lift pass, enabling them to take advantage of all the slopes St. Anton has to offer, all winter long for a tiny price.

Toques in the Snow
Six St. Anton restaurants have again been recognized by Gault Millau: Die Stube at the Hotel Alte Post, the Verwallstube at Galzig, Raffl´s at St. Antoner Hof, the restaurant at Arlberg Hospiz, the Hospiz Alm in St. Christoph am Arlberg, as well as the Tannenhof – awarded with no less than three toques in both last and this year’s Gault Millau Guide. This famous Tyroloean ski resort can therefore now boast of ten toques and 90 coveted Gault Millau points.

Further information is available from St. Anton am Arlberg Information Offices under +43 (5446) 22690 or www.stantonamarlberg.com

Text, photo and videos courtesy of: St. Anton am Arlberg Tourist Board
Turismo 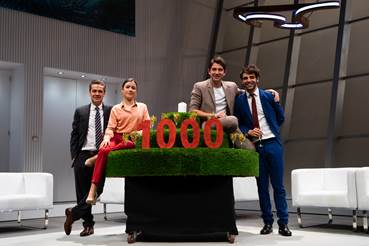 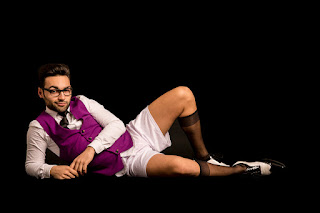